The Equestrian Life in Costa Rica. Horse lovers in Guanacaste. 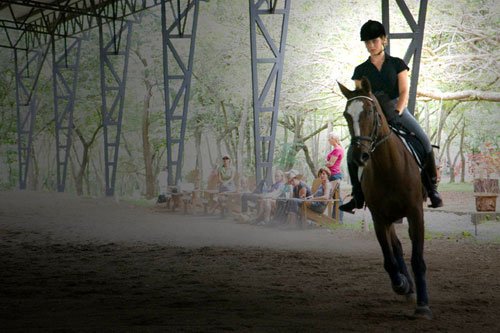 By johnbridges February 23, 2018 No Comments

The northern Pacific province of Guanacaste is one of the world’s hottest vacation spots.

It is well known for its famous surf breaks and world class sport fishing but many others come to the area to enjoy the equestrian life offered here. We had been vacationing in Costa Rica for eight years when we decided to make a permanent move four years ago.

One big factor was the ease and relative value of horse ownership in the area. Our first month here my daughters began taking lessons and riding their bikes three times weekly to the stables near our home in Flamingo.

Before I knew it, we had leased a horse (testing the waters!) One year later, we had our own horses at a fraction of the cost in the states.

Our area in the northern beach zone of the Guanacaste province has many equestrian centers but the three most popular ones are Finca Casagua, Cerro Grande and Tierras Nativas. All three offer boarding facilities, lessons and trail rides… but that’s where the similarities end.

Meet Kay Dodge, Guanacaste’s horse country pioneer. Kay first came to Costa Rica in 1974 and finally settled into her ranch, Finca Casagua, in 1989. Casagua is located in Portgolpe, just 15 minutes from the best beaches of Guanacaste, including Playas Conchal and Flamingo.

Kay is a wildlife artist and has a Ph.D. in Biology and Ecology. Kay breeds and trains her own stock, offering English and western lessons. She married her Costa Rican vet, Esteban, and they have worked side-by-side for almost twenty years.

Over the years their 50 acre ranch has evolved and now offers private suites and guest houses at the Painted Pony Guest Ranch. They are famous for their cantina tours and weekend western shows.

Next on the scene was The Cerro Grande Combined Training Farm (Equestrian Center) which is within the gated development of Cerro Grande Estates. The property is located between the popular beach towns of Playa Tamarindo and Playa Avellanas.

The equestrian center in this 250 acre development has one of Costa Rica’s finest horse trainers, Amanda Gardner. Amanda has an impressive resume, having trained an Olympic competitor. In the full 30 x 70 dressage ring she offers lessons and also takes her students on the miles of trails weaving throughout the property.

Cerro Grande is known for it’s annual equestrian competition and also the huge Halloween party. Tierras Nativas, although a newcomer in it’s field, has the most state-of-the-art facility in the area. The buildings were all built with native hardwoods harvested on site.

Located in the little town of Tempate, this 70 acre equestrian facility is near Finca Casagua and all the best beaches. It is situated in the center of an amphitheater setting inside rising hills and native mature landscaping.

From the top of the hills, the Pacific Ocean can be seen. The facility is currently home to local horses as well as some of the finest imported European horses such as Friesians and Warmbloods.

The ownertrainer, Jen Dalton, grew up under the wing of her grandfather, a famous rodeo champion. She recently won the roping competition at the Liberia festivals. Just for fun, she also raises goats and personal protection dogs.

No matter what you’re looking for, there is an equestrian facility here in Guanacaste that will meet your needs!

This site uses Akismet to reduce spam. Learn how your comment data is processed.